Having last provided a round-up of my publications and projects back in 2019, it is perhaps time for an update covering the last two years, a period in which the COVID pandemic has of course overshadowed everything. Readers of this blog will probably be most aware that this year I relaunched the scholarly interview series that I originally ran between 2012 and 2015. In its original form, I selected scholars from any background whose work interested me – folklorists, archaeologists, and philologists among them – although in its current iteration I am focusing more narrowly on those whose work explores new and culturally alternative religious movements. It is for this reason that I have renamed the blog from “Albion Calling” to the more fitting “On New and Alternative Religions.” The relaunch has been initiated at the encouragement of Professor David Bromley of the Virginia Commonwealth University and operates in conjunction with his World Religions and Spirituality Project (WRSP), a really useful encyclopaedic resource for those interested in learning more about different religious traditions, especially those lying outside the cultural mainstream. Each interview appears both here and over at the WRSP website, and I am now lead director of interviews for the WRSP. 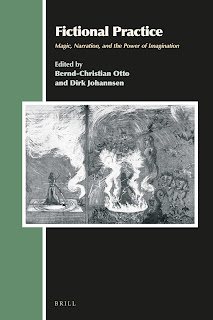 I’ve written a couple of encyclopaedia entries for the WRSP in the past, and a third also appeared earlier in 2021, devoted to the prominent English Wiccan Janet Farrar. Unlike most academic publications, it’s freely available to read. Those interested in Wicca may also wish to check out a newly published chapter of mine – “Drawing Down the Moon: From Classical Greece to Modern Wicca?”. Exploring the history of one of the central components of the Wiccan ritual liturgy, it appears in the new Brill volume Fictional Practice: Magic, Narration, and the Power of Imagination, edited by Berndt-Christian Otto and Dirk Johannsen. I know Brill books are rather expensive, but hopefully those interested will be able access the book through their local or university library service – there are a lot of really fascinating chapters in the edited volume.

A chapter of mine titled “Wicca as Witchcraft” also appears in Darren Oldridge’s third edition of The Witchcraft Reader, published by Routledge last year. My contribution to this reader is a revised version of a chapter from my 2016 book, Wicca: History, Belief, and Community in Modern Pagan Witchcraft, and it’s quite an honour to see my writings alongside those by the likes of Norman Cohn, Gustav Henningsen, Jacqueline Simpson, and Stuart Clark. My interest in witchcraft is also reflected in an article that I have out in the latest edition of the Alternative Spirituality and Religion Review journal – ““She Comes from a Cursed Lineage:” Portrayals of Witchcraft, Wicca, and Satanism in The X-Files.” As I hope this article shows, there’s still much research to be done when it comes to depictions of witchcraft in popular culture, especially with regard to the interplay between traditional concepts of witchery and those new religions whose practitioners claim the identity of the witch for themselves.

Over the past few years I’ve been increasingly active in the study of medievalism, the ways in which post-medieval societies have interpreted and utilised the Middle Ages. To that end, I have an article in the thirtieth edition of the Studies in Medievalism series, “In Woden’s Shadow: Anglo-Saxonism, Paganism, and Politics in Modern England.” Based on a paper I gave at the 2019 ‘Remembering the Middle Ages? Reception, Identity, Politics’ conference in London, the article looks at how certain modern Pagan groups based in England have drawn their sense of identity from the early medieval, or “Anglo-Saxon,” period of English history – the same period I looked at in my PhD research. My interest in both medievalism and early medieval archaeology is also evident in an article of mine that appeared in Offa’s Dyke Journal last year, “Saxon Kent versus Roman London? Presenting Borderland Heritage at the Faesten Dic in Joyden’s Wood, Kent.” Here I look at the Faesten Dic (pictured below), a linear earthwork lying just outside Greater London, discussing both the archaeological evidence with which we can try to fathom its age and purpose as well as the ways in which the highly dubious narrative about it representing a fifth-century Saxon-Roman border are presented to visitors of the site. The latter article is open-access, meaning that it’s free to read. 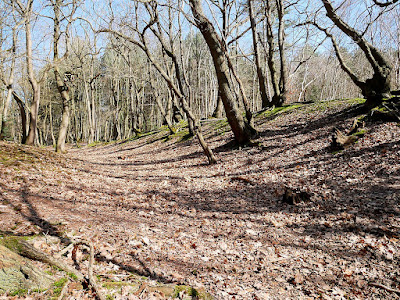 I’ve also kept up my work as a book reviewer, doing so for the American Academy of Religion’s Reading Religion website (on whose editorial board I still sit), Nova Religio: The Journal of Alternative and Emergent Religions, and Time and Mind: The Journal of Archaeology, Consciousness and Culture. Topics covered in these reviews include the reception of Old Norse religion, depictions of witchcraft in US film and television, and femininities in the esoteric religion of Thelema.