From David Bowie to UKIP: My 2019 Roundup

The past year has been a busy one, during which I completed my PhD on the archaeological and historical evidence for the religious uses of watery places in early medieval England. It is hoped that this research will see publication in the coming years, alongside other smaller projects that I have been undertaking on the early medieval period and its reception in subsequent centuries.

2019 also saw the publication of my second book, an edited volume put together with the Israeli historian and scholar of religion Shai Feraro (who I interviewed here back in 2014). The volume is titled Magic and Witchery in the Modern West: Celebrating the Twentieth Anniversary of ‘The Triumph of the Moon’. As its title suggests, it has been put out in honour of The Triumph of the Moon: A History of Modern Pagan Witchcraft, Professor Ronald Hutton’s ground-breaking work on Wiccan history that first appeared in 1999 (but which has just been re-released in a newly revised edition by Oxford University Press). Hutton has been kind enough to produce an afterword to the edited volume, which also contains chapters on modern witchcraft and related topics by Feraro, Hugh B. Urban, Helen Cornish, Jenny Butler, Sabina Magliocco, Sarah M. Pike, Léon A. van Gulik, Manon Hedenborg White, and Chas S. Clifton. My own contribution, “Navigating the Crooked Path: Andrew D. Chumbley and the Sabbatic Craft,” represents the first scholarly biography of Chumbley, an influential figure in the late twentieth and early twenty-first century occult scene and one of the foremost figures in the “Traditional Witchcraft” milieu. The book has been published by Palgrave Macmillan as part of their series on Palgrave Historical Studies in Witchcraft and Magic. Like many academic volumes, it isn’t exactly cheap, but those interested in buying a copy can keep an eye out for the publisher’s next sale. 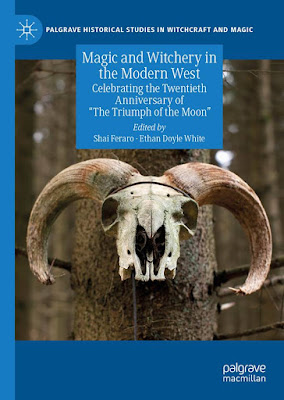 I have also had two of my articles published in peer-reviewed journals over the past year. One of these, titled ““One Magical Movement from Kether to Malkuth”: Occultism in the Work of David Bowie,” has appeared in volume seven of Correspondences: Journal for the Study of Esotericism, an excellent open-access publication that allows anyone to read its online contents for free. The article offers the first scholarly appraisal of how Bowie drew upon forms of occultism in creating his music. As a Bowie fan, I have long been interested in this side of his oeuvre, a topic that clearly intrigues many others given the considerable amount of online speculation about it. A conference held in the summer of 2018 at Goldsmiths, University of London, “Decadence, Magic(k) and the Occult,” permitted me the opportunity to delve deeper into this subject, resulting in the Correspondences article.

The second of these two articles explores another theme that interests me, the intersections of religion, heritage, and politics. Specifically, the article focuses on the contrasting attitudes toward Christianity and Islam within the UK Independence Party (UKIP), the right-wing group whose successes at the ballot box paved the way for Brexit. Titled “Christianity, Islam, and the UK Independence Party: Religion and British Identity in the Discourse of Right-Wing Populists,” the article appears in the sixty-first volume of the Journal of Church and State, published by Oxford University Press.

I have also continued my work as a book reviewer for various journals, including Nova Religio: The Journal of Alternative and Emergent Religions, Time and Mind: The Journal of Archaeology, Consciousness and Culture, and the American Academy of Religion’s Reading Religion website, on whose editorial board I continue to sit. For the latter I have reviewed books on fairies, early medieval rituals, the material evidence for counter-witchcraft, and the paranormal in popular culture over the course of 2019. All of these are available online for free, for anyone who might take an interest in such topics.

Posted by Ethan Doyle White at 21:56 No comments: