My reflections on "New Antiquities: Transformations of the Past in the New Age and Beyond", Freie Universität Berlin

I’ve just arrived back in (rainy) London after a week under the slightly sunnier skies of Berlin, where I took part in the two-day academic conference “New Antiquities: Transformations of the Past in the New Age and Beyond.” Held at the Freie Universität Berlin in the city’s leafy southern suburbs, the conference was organised by Almut-Barbara Renger of the Freie Universität and Dylan Burns of the University of Leipzig and sought to undertake a “critical examination of how individuals and groups appeal to, reconceptualize, and reinvent the religious world of the ancient Mediterranean as they attempt to legitimize developments in contemporary religious life (1960s–present day).” 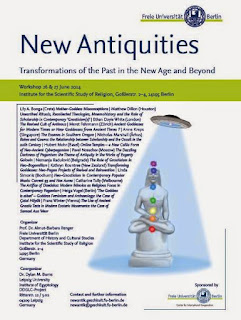 After an introductory welcome from Renger and Burns, the event kicked off by delving into the role of contemporary Pagan religions in appropriating and re-using elements of pre-Christian Mediterranean religion. First up was a Russian scholar, Ravel Nosachev of Moscow’s Saint Tikhon’s University, who discussed the life, thought, and influence of the mid-20th century Russian esotericist Evgeniy Golovin, a worshipper of Dionysus who articulated his own unique form of Traditionalism. I had never heard of Golovin before, but I found Nosachev’s description fascinating. The conference moved on to look at Western-centred Pagan concepts of a matriarchal, Goddess-venerating Mediterranean past, starting with the University of Zurich’s Meret Fehlmann, who outlined the emergence of this theory in the works of Jane Ellen Harrison and Jacquetta Hawkes and then focused on how it has been articulated by the prominent American Goddess Movement thealogian Carol P. Christ. Fehlmann’s presentation was followed by a paper from Kathryn Rountree of New Zealand’s Massey University, read in absentia by Nicholas Marshall. Here, Rountree discussed the differing approaches to ancient Mediterranean goddesses found in the Maltese Goddess Movement and in Greek Hellenismos, two Pagan groups with somewhat differing approaches to reinventing aspects of the past.

Sticking with this theme was Australian archaeologist Caroline Tully of the University of Melbourne (whom I interviewed about her work here at Albion Calling back in January 2013), with her analysis of how the belief systems of Minoan Crete have been utilised by two Pagan groups, the Goddess Movement and the Minoan Brotherhood. Lily A. Bonga of the INSTAP Study Center for East Crete then explored how the concept of an ancient south-eastern European society devoted to a Mother Goddess developed within academia, highlighting the work of scholars like Arthur Evans, James Mellart, and Marija Gimbutas, and asserting that while her ideas are nevertheless incorrect, much of the criticism levelled at Gimbutas has been unfair and relied on straw man arguments. Taking a contrasting position to Bonga’s latter argument was the Freie Universität’s archaeologist Helga Vogel, who provided an overview of current research at the Neolithic site of Çatalhöyük in Turkey and highlighting how this does not support the interpretations of such sites articulated by adherents of the Goddess Movement. A longstanding feminist activist, Vogel presented the intriguing argument (albeit one that has been made previously by others, namely Cynthia Eller) that a belief in ancient matriarchies and a linked Great Goddess religion is unnecessary for contemporary feminism and instead reinforces essentialist gender stereotypes.

Also talking about the contemporary Pagan use of Mediterranean sources was Hubert Mohr of the University of Basel, who gave an overview of online Pagan “temples,” building on the work of Douglas Cowan. Unless I simply misunderstood (which is always possible), I believe that he argued that contemporary Paganism was primarily a reaction against Christianity, and that with the decline in Christian dominance in Western nations we could talk about the emergence of a “Post-Paganism.” In my own paper, I examined the revived worship of Antinous, the deified lover of the Emperor Hadrian who has become particularly beloved of gay men and others identifying under the wider rubric of “queer.”

Subsequent discussions about modern Paganism remained good humoured but did reveal some opinions quite a bit harder than my own; many participants took a firm view that modern Pagan views of the past were fundamentally wrong and needed to be treated as such. Drawing on the work of (mostly British) scholars such as Robert Wallis and Jenny Blain, I argued the point that such a combative and hostile attitude would be detrimental to dialogue and would hinder attempts at forming good relations between Pagans on the one hand and heritage management and archaeologists on the other. Seeking to educate people about contemporary scholarship regarding past societies is one thing, but pushing views that border on religious discrimination is quite another.

Following the papers on contemporary Paganism, the workshop moved on to look at how another broad family of new religions, the “Neo-Gnostics,” have utilised ancient Mediterranean material. This was a subject about which I knew very little, but it was fascinating to listen to a variety of excellent papers on the subject. Kicking this off was a paper by Franz Winter of the University of Vienna, read in absentia by Dylan Burns; in this, Winter discussed the use of ancient Gnostic texts in the work of Colombian esotericist Samael Aun Weor. This paper was followed by an offering from Nemanja Radulović of the University of Belgrade in which he examined the use of Gnostic elements within two “Neo-Bogolomist” groups active in south-eastern Europe: Bulgaria’s Universal White Brotherhood and Croatia’s Slavic Church of Bogomils and Holy Grail. We then headed over to rural Oregon with Anne Kreps of the Yale-NUS College in Singapore. Here, she discussed the Essene Church of Christ, a New Age-influenced Christian group founded by Brother David “Day” Nazariah which claims a pedigree stretching right back to the ancient Essenes, an ascetic Jewish sect which has come to be associated (rightly or wrongly) with the Gnostic Dead Sea Scrolls.

Nicholas Marshall of Aarhus University provided a paper on the relationship between scholarship and occultism during the 20th century, focusing in particular on the interpretation of theurgy within the two communities. Particularly intriguing for my own interests was his discussion of how followers of Thelema, the new religious movement founded by Aleister Crowley, have interacted with academia. Following this was Matthew Dillon of Rice University, Houston with a paper arguing that mnemohistory is the best approach to adopt when examining contemporary “Gnostic” movements. The final paper on Neo-Gnosticism was provided by Linda Simonis of the Ruhr University Bochum and delved into the Gnostic elements present in the lyrics of two songs by British esotericist and musician David Tibet. Throughout these papers, I was repeatedly reminded how many of those occultists who embrace elements of ancient Gnosticism mix them with elements of contemporary Paganism, thus making it all the more appropriate that these two broad religious movements were being discussed together at this workshop.

This was a really good event and my thanks go out to both Almut and Dylan for organising it, and to everyone else who helped to make it an intellectually stimulating couple of days. Hopefully it will inspire future events across Europe at which similar topics can be discussed and pioneering new research can be presented.