An Interview with Brian Hoggard

After what seems too lengthy an absence here at Albion Calling, I’m back with another interview in my ongoing series of discussions with academics devoted to the study of religion, ritual, and magic. This week we have Worcester-based archaeologist Brian Hoggard, one of the foremost researchers into the archaeology of British folk magic, a fascinating subject to which he devoted a chapter in Owen Davies and Willem de Blecourt’s important edited volume Beyond the Witch Trials: Witchcraft and Magic in Enlightenment Europe (Oxford University Press, 2004). Hoggard is currently preparing his latest project, Apotropaios, a monograph on apotropaic and counter-witchcraft material concealed within the home, which looks set to represent a major contribution to the field. We talk about his research and the role that archaeology can play in the study of folk magic. 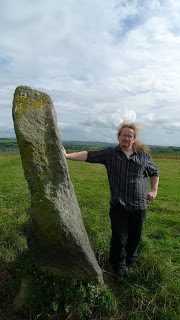 [EDW] So Brian, thanks for talking to Albion Calling today; the first question I’d like to ask is how you first decided to pursue archaeology, and what was the academic trajectory that led you to the position that you are at now?

[BH] During my late teens and early twenties I developed a strong interest in local places and wanted to understand the stories behind them. This led to me studying local history, archaeology, architecture and folklore. It also led to me returning to college and then going on to University where I originally intended to study archaeology. I’d started writing a book about Bredon Hill [in Worcestershire] by then however so needed to remain in the area and at that time the best local choice was to do a history degree. Luckily for me the history of witchcraft was part of my module choices and I focused on that in my dissertation too.  When I came across Ralph Merrifield’s book [The Archaeology of Ritual and Magic] it seemed that my background subjects were perfectly suited to doing an in-depth study of ritual objects from the early modern period so I began studying at that point (back in 1999).

[EDW] You’re one of very few archaeologists to have actually devoted your attentions to folk magic in the British archaeological record. Off the top of my head, I can only think of the late Ralph Merrifield, author of The Archaeology of Ritual and Magic (1987), who really devoted considerable attention to the subject. What made you pursue this research interest, and have you found it easy pursuing such a neglected topic? Do you feel that there have been naysayers within the archaeological community who are sceptical of this sort of research?

[BH] I’ve always had an interest in alternative beliefs and practices so stumbling across Merrifield’s book was a joy. Having just studied witchcraft from the history perspective and discovered that none of the historians in that field had included any archaeology at all it was clear to me that more work was needed.  One of the advantages of studying an area like this is that every new bit of information feels like an exciting discovery because it’s more than likely not been recorded or written about before. There is some work out there on this topic but it tends to be very find-specific rather than looking at the broader subject area.  I haven’t come across many naysayers but the nature of these finds is that they are incidental within building archaeology so often appear as footnotes rather than the subject of papers in themselves.

[EDW] Early modern and modern British folk magic has been examined by several historians (Keith Thomas, Owen Davies etc), so I wondered if you had taken an interdisciplinary approach by looking at the archaeological material in tandem with historical documentation? Do the two sources match up, or are you finding things in the archaeology that the historians just aren’t picking up on?

[BH] The aim is to be as interdisciplinary as is needed to properly understand the finds.  Most of the objects were intentionally concealed and appear to have been deliberately not mentioned in contemporary documents so as not to draw attention to them so often the only evidence is the material evidence. Certainly a good number of practices were written about which helps provide a context for these other, more private, practices.  Occasionally a find will tie up with some local history, for example, a witch-bottle from Essex was accurately dated and this clearly tied-in with the terminal ill-health of a former occupant of the house.  No mention was ever made of any witch-bottles but the evidence was there in the hearth and the history of the occupants was well known.

[EDW] Occultism and magical practices are widespread in contemporary Britain, in many cases having little or nothing to do with traditional vernacular practices of healing and counter-witchcraft, but I’d be very interested if you had had experiences with individuals who do perform older forms of spell-casting and related practices?

[BH] I regularly receive correspondence from contemporary witches and pagans. Some are Wiccan but many are independent and claim to be descended from and trained by other witches.  Pretty much all of them know about witch-bottles but have their own variations of the recipe.  Written charms are the only other find-type that they tend to speak to me about and, again, modern versions are very different to the ones recovered from old buildings.  One or two witches have claimed to have a book which has been handed down through their family which contain all kinds of magic, herbalism and astrology - thus far none have been prepared to share but they do have a strong code of conduct about that.

[EDW] You have appeared on television on numerous occasions; could you tell us a bit about your views on the role that documentaries can play in encouraging greater public awareness of archaeology and folk magic?

[BH] I think documentaries can be a really good way of outlining the topic for people and giving them the chance to see the objects. It’s rare that they go into any great depth on the subject (which is a shame!) but maybe one day a proper documentary series will be created which explores the objects and the theories about them more fully. Certainly they’ve been very useful for me in drawing attention to my research and encouraging people to report objects to me through my website and definitely they’ve had a role in spreading awareness amongst heritage professionals too.

[EDW] Your new project, which you are currently in the process of raising funds for, is called Apotropaios – it’s a book drawing on your many years of research into objects concealed in houses, among them shoes, dead cats, and witch bottles. It looks set to be a really important milestone in the study of these items. Could you tell us more about this, and your decision to self-publish?

[BH] Apotropaios is the Greek root of the word apotropaic which means ‘evil-averting.’  I’ve been studying the topic since 1999 but with one thing and another I’ve never had the time to get around to publishing it.  I’ve decided that my book needs to be really well illustrated and that self-publishing is the best way to achieve that.  I am also really keen to have substantial appendices in the back of the book which will be useful for future researchers of the topic. I’m just not sure I’d be able to find a publisher who would be prepared to illustrate it to that degree or include all the data.  The plan is to publish something that will be a genuine resource for future scholars and to finally get all my thoughts out into the public domain.

[EDW] And lastly, I’d be interested to hear your thoughts on what you see as the future for the archaeology of ritual and magic here in Britain?

[BH] There’s still a lot of scope for study here.  Although I have done the largest survey on the house protection topic thus far I am well aware that it is nowhere near exhaustive.  Detailed regional studies (perhaps on a county basis) are needed and indeed more individual case studies. There is so much of this archaeology out there and it needs mapping to demonstrate the extent and duration of these beliefs and practices. It’s an exciting area with huge room for more study.

EDW: Thank you Brian, and good luck with Apotropaios. For those who would like to donate to Brian’s project, and enable him to publish the book to the desired standard, you can visit his Kickstarter link here. But be quick, as the fundraising campaign ends on 16 August 2013; that’s just ten days away!