It's been a busy few weeks for me, in part due to two academic conferences both held at my alma mater, the UCL Institute of Archaeology, where I recently completed my master's degree. Now that they've been and gone, I feel that it is time to put down some of my thoughts as to their successes and areas where they could probably do with some improvement, in the hope that those who were unable to attend for whatever reason can get a sense of what they were actually like. 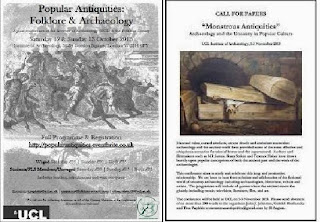 The third annual "Popular Antiquities: Folklore and Archaeology" conference went ahead on the weekend of the 12 and 13 October, organised jointly by myself, Tina Paphitis, and Dr. Caroline Oates of The Folklore Society (FLS). "Popular Antiquities" first appeared three years ago, when it was set up by Ms Paphitis alongside another UCL doctoral student, Martin Locker. Having since completed his thesis, Dr. Locker has moved on to other things, resulting in my enlistment as co-organiser, although I should stress that I was still the junior partner in the operation, with Ms Paphitis deserving most of the credit. I initially feared that having entered its third year, the conference might have run out of steam, but in hindsight I worried needlessly, and the whole event went very well. Although tickets didn't sell out, attendance was good, and we had an excellent array of papers being presented. Highlights for me included Jeremy Harte's discussion of the moral tales surrounding megaliths and John Clark's paper on votive deposition in the River Thames. However, it was noticeable that the event was dominated by folklorists, and there were points where I was one of the only archaeologists in the room. This is a shame considering that the whole purpose of the event was to bring together the two disciplines, as had successfully happened in previous years. Although many of the attendants were clearly keen to see the event continue for a fourth consecutive year, that might not be possible, considering the fact that over the next 12 months, both myself and Ms Paphitis are going to be at important junctures of our academic careers (she will finish her PhD, and I will hopefully start mine); nevertheless, we hope that it is something that can be revived in future.

"Monstrous Antiquities: Archaeology and the Uncanny in Popular Culture" was held from 1 to 3 November, and was organised by Gabe Moshenska, Tina Paphitis, and John J. Johnson, all three of whom are currently based at UCL in one capacity or another. The first conference of its kind, the event was a sell-out, although unfortunately many UCL students (who could obtain free tickets) failed to show up. Although I had no hand in organising this conference, I did present a paper on the morning of 2 November, titled "To Worship Me, Take Wine and Strange Drugs: Archaeology and Occultism in the Work of Kenneth Anger." I felt that this went very well, and although I didn't get many questions (it was clear that very few members of the audience had ever heard of Anger), I received many positive comments and it may be that I shall repeat this talk for a public audience in future. There are some initial plans to see the papers featured in the conference appearing in a future collected anthology, although if this does not come to fruition, then I will certainly seek to publish my paper in a peer-reviewed journal. Some of my favourite highlights of the conference were James Holloway on the influence of archaeology in the work of H.P. Lovecraft, and Michael Bintley on the use of archaeology and Arthurian legend in Bernard Cornwell's Warlord Chronicles, although there were many other great papers exploring the way that archaeology and the uncanny had been incorporated into horror fiction, graphic novels, and computer games. In the likely event that a second "Monstrous Antiquities" is held next year, then I strongly suggest that anyone with an interest in such subjects come along; if you want to get a sense of what the conference was like, check out its Twitter feed over at #uncannyarch.

Part of the importance of these two events, both housed at what is arguably Europe's greatest archaeology department, is that they reflect the sheer diversity that the field encompasses. Archaeology isn't just about looking at pot sherds, soil stratigraphy, and the building up of chronological sequences. It is also about looking at how the past is adopted and used by later peoples, whether that be in folklore or in modern-day literature and media. Archaeology is a vast subject that can tell us about the entire history of our species, and that –– for me –– is why it is so fascinating.